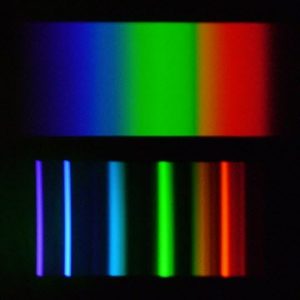 Color temperature, as applied to lighting products, is expressed in degrees Kelvin, and uses the abbreviation K. When talking about the color temperature spectrum, numbers at the lower end of the scale refer to light that is red, and as the number increases, the color of the light becomes orange, then yellow, then white, then blue. We strongly encourage our customers to use the color temperature in degrees Kelvin when comparing lighting rather than any of the marketing names that are given to the different light colors. The Kelvin temperature is the only consistent way of describing these colors, because it is always the same from manufacturer to manufacturer and from product to product, unlike the marketing terms. Let’s consider some common light sources and their color temperatures.

The flame of a tallow candle produces light at a color described as 1900K. This light is indeed very orange in color. A standard incandescent lightbulb with a tungsten filament and a clear glass bulb produces a yellow light described as 2400K. An incandescent lightbulb with a coated glass bulb, commonly referred to as a “soft white” lightbulb, produces light described as 2700K. Most people will perceive that, while it is still a yellow light, the “soft white” lightbulb is noticeably less yellow in color than the uncoated lightbulb when they are compared side by side. Halogen light bulbs produce light that is described as 3000K, and is one further step away from yellow and becoming more white. This color is frequently called “warm white” or “halogen white.” A typical “cool white” fluorescent tube produces light that is described as 4100K. This color is also called “neutral white.” Most people will perceive this light color to be white with just the slightest hint of a yellow cast. This same light color is found in nature as the light on a moonlit night with a clear sky and a full moon. As we continue moving up the Kelvin scale we reach 5000K, a color which is referred to by many different names by lighting manufacturers. Sometimes this color of light is called “stark white,” “bright white,” “true white,” “cool white,” or even “daylight.” This light color is commonly available from a number of different light sources, both standard linear fluorescent tubes and compact fluorescent bulbs (CFLs,) as well as from induction and LED lighting. 5000K is the most common light color for modern exterior lighting products which are on the market currently. Most people perceive this light to be a brilliant white with no apparent trace of any other hue at all. Higher still on the Kelvin scale we come to 6500K, which is sometimes called “daylight,” “daylight deluxe,” or “true daylight.” This is approximately the color of light outside during daytime on an average day. Most people will perceive this light to be white with a very noticeable blue cast. Light sources are available above this, and become more blue in color as the Kelvin temperature increases, going all the way up to 10,000K. This is generally considered to be the light color of the clear blue sky itself. Light sources at these high Kelvin temperatures are mostly for specialty applications, such as aquarium or horticultural lighting.

It is our hope that this explanation will allow our customers to have a better understanding of a very important aspect of their lighting, and to be able to make informed choices when purchasing lighting products. When it comes to actually choosing a light color, usually the decision will come down to personal preferences. However, it makes the choice easier for everyone involved if we can all use the same language to describe the options that are available.